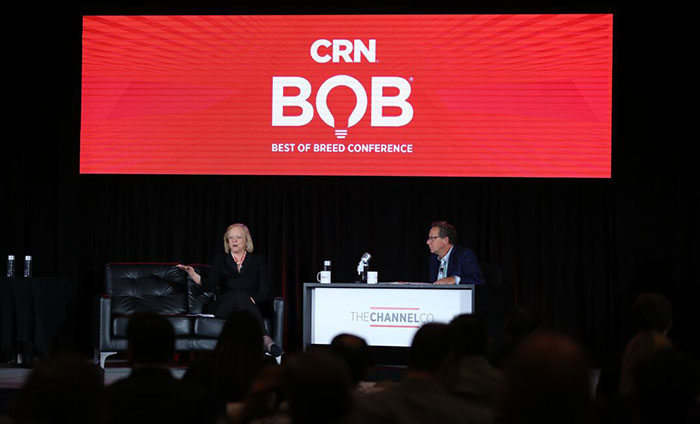 Get CRN's coverage of the BoB Conference 2017, including keynotes from Michael Dell, Meg Whitman, and Pat Gelsinger.

VMware CEO Pat Gelsinger On Rapid Growth In Non-VSphere Products, How Partnerships With Competitors Make Sense And Why Running Containers Without VMs Is 'A Stupid Idea'
In a Q&A session on the main stage of this week's 2017 Best of Breed Conference, VMware CEO Pat Gelsinger fielded questions on the company's new multi-cloud strategy, partnerships with rivals and the 'stupid idea' that you can run containers on bare-metal servers.

HPE CEO Whitman: I Would 'Definitely Not Think About' Running For President, Next Career Step May Be 'Public Service'
Whitman says her run for governor of California was "probably" her only "experimentation" with running for public office.

HPE CEO Whitman: It's Time For Partners To Move From 'Farmers' To 'Hunters'
Whitman took center stage at the 2017 Best of Breed conference in Atlanta and pledged to work hand-in-hand with solution providers to get in front of customers and help partners break into new accounts. 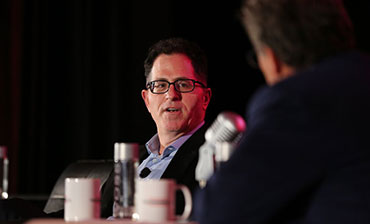 GreenPages CEO Dupler: The Channel Wins By Providing Clarity, Helping Clients Chart A Course Forward
Wrapping up The Channel Company's 2017 Best of Breed conference Tuesday evening, Dupler noted that the IT "confusion and complexity" the channel is navigating underscores just how vital IT has become to the success of all businesses.

Docker CEO Steve Singh On The VMware Relationship, Security And The Opportunities Around Containers For Partners
Singh took center stage at the Best of Breed conference on Tuesday and told solution provider his container tech company will win in a competitive market because of its openness and portability.

Trump Economic Adviser Larry Kudlow: The Fed Is Part of The 'Swamp'; Now Is The Time To Pass Tax Reform
Larry Kudlow, the conservative economist who helped write the Trump tax reform plan, says the Federal Reserve needs to stop worrying about inflation that doesn't exist.

Docker CEO Urges Partners To Get Involved In The Rapid Adoption Of Containers, Public Cloud Growth
Partners "typically see five to seven times multipliers on the profits" when they help enterprises move legacy applications to the cloud, using containers, said Docker CEO Steve Singh at the Best of Breed Conference.

Dell Technologies Launches A New IoT Division And Partner Program Amid 'Great Boom' In Edge Computing
Dell plans to invest $1 billion into IoT products, services and partners in the next three years.

HPE CEO Meg Whitman On Upcoming Changes To Field Compensation, The Impact Of Dell On HPE's VMware Relationship And Why Hardware Still Matters In The Software-Defined Era
Whitman tackled questions at the Best of Breed conference, ranging from the channel impact of the company's HPE Next restructuring to what her next career move might be after HPE.

LogicMonitor CEO: The Channel Is At The Forefront Of IoT As Customers Seek Trusted Subject Matter Experts
LogicMonitor CEO Kevin McGibben said channel partners could help their customers overcome challenges in the current technology landscape and succeed with emerging technologies like IoT.

Dell Technologies CEO Michael Dell: Partners Are Fueling Huge Growth And 'We're Winning Big'
It has been slightly more than a year since Dell closed the largest acquisition in the history of the IT industry and the channel is already benefiting from the conglomerate's scale.

Deloitte CTO: Solution Providers Need To Help Customers Modernize Their Businesses and Prioritize Technology Trends
Deloitte CTO Bill Briggs, during his opening remarks at Best of Breed 2017, said that solution providers are a critical component of their customers' digital strategy.

Trace3 CEO Beecher Credits The 'Human Element,' Honesty And A Simple Playbook As Keys To Becoming A Next-Gen Solution Provider
"Everything we build at Trace3 is focused not just on selling to IT and helping IT architect itself, but how can IT rearchitect the business? Everything we do in technology is focused on helping these companies transform," Beecher said to fellow solution providers at the 2017 Best of Breed conference.

Women of the Channel - Apply Now