As D&H Distributing celebrates its 100th anniversary, Co-Presidents Dan and Michael Schwab and their employee co-owners are setting the stage for the next century of growth. 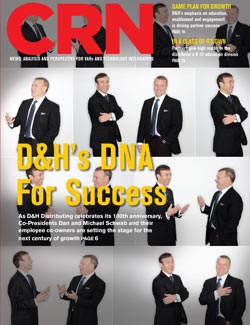 D&H Distributing, which is celebrating its 100th anniversary this year, is always looking to the future with a focus on always changing to deliver a better partner experience.

Even as D&H Co-Presidents Dan and Michael Schwab chart the course for future growth with co-owners, they are forever focused on making sure that what they call the 100-year-old "Rock of Gibraltar" foundation of doing the right thing for employees, vendors and customers does not change.

"The people at D&H are our No. 1 asset and always will be," said Michael Schwab, who started working for the company as a sales rep 29 years ago. "I describe them as 'engaged problem-solvers.' They are engaged with customers, but they are also empowered to solve their problems. People sometimes forget that business is people-to-people. It is relationship-driven. That is how business gets done."

Partners Say D&H's Technology Muscle Is Key To Closing Deals
Three solution providers tell CRN how D&H is helping them close deals with their SMB customers.
D&H Holds The Key To Cisco Partner Success In SMB -- And Beyond
Cisco's relationship with D&H is key to expanding its SMB partner ranks.
100 Years Of Looking Ahead: D&H's Culture of Success
CRN looks at the major milestones and moments in the long and storied history of D&H.
Cutting Complexity: D&H Helps Partners Build Solid Solutions For SMB Customers
Partners are building best-in-class solutions with help from D&H as the distributor remains focused on the SMB end user and the resellers that support them.
Partners Give High Marks To D&H's K-12 Education Division
Partners say D&H's K-12 education programs are built with their needs in mind and include white-glove services with the distributor's engineers who help integrate technology in the field.
'

D&H Helps SMB Solution Providers Take Marketing To The Next Level
D&H's Mary Campbell has made it her -- and her company's -- mission to help SMB-focused solution providers take advantage of marketing to put themselves front and center with potential customers.