"That is in terms of the economics of purchasing the hardware, but probably more importantly, the software licensing implications of being able to deploy a single-socket system and get equal or better performance to what you could get on a dual-socket system at a drastically lower software licensing profile," said Lattin, HPE's vice president and general manager of ProLiant and Cloudline systems.

AMD said the new processors, which feature up to 64 cores, provide a 25 to 50 percent lower TCO over Intel's second-generation Xeon Scalable processors that launched in April. At the recent EPYC launch event, HPE said these new gains allowed it to beat 37 records for server performance and efficiency.

For instance, the single-socket ProLiant DL325 delivers a 321 percent performance improvement for database virtualization. It also offers a 37-38 percent improvement for in-memory data analytics while providing a 30 percent gain in price-performance.

"So the TCO equation that you can get with building on that single-socket kind of infrastructure is a breakthrough," Lattin said. "It was a breakthrough with Naples [first-generation EPYC], and it's magnified even further now with Rome."

What follows is an edited transcript based on CRN's interview with Lattin, who talked about the benefits of second-generation EPYC, how HPE's workload matching feature takes advantage of the new processors and how HPE is helping partners adopt the new AMD-based servers. 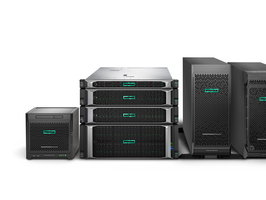 We see them heavy in the virtualization space, in traditional virtualization environments as well as virtualized database environments. High-performance computing is a big play for us. Big data environments, analytics, and AI or machine learning kind of environments. That full sweep is the real set of target segments, where the capabilities of second-generation EPYC really are exploited.

What most excites you about AMD's second-generation EPYC processors?

Certainly, the raw performance is incredible That's where most of the benchmark results are, the breakthroughs we've had. Price-performance, I think you saw in [AMD executive Forrest Norrod's] chart in here, the kind of total stack and what the price points are and [how that] translated into price-performance.

And then, for us, because workload optimization is so important, being able to tune the system to particular workloads, I think is where not only second-generation EPYC, but the combination of that with ProLiant, shines. And then in the security domain, looking at our Silicon Root of Trust stack, the infrastructure that's built off of that, and the way that dovetails with the security processor in EPYC is critical, because first of all, you got the world's most secure industry-standard server built on our Silicon Root of Trust capability, couple that with what AMD's doing, and what you end up with is the world's most secure AMD-based industry standard server. What's the channel strategy for these new products?

The channel is a very important part of our business, and the channel has been a key partner in the first-generation, EPYC-based systems for us. We see good adoption broadly across the globe through channel partners on those particular workload segments that I talked about.

We'll be publishing, for example, in North America a set of configured units to the channel partners in our Smart Buy Express program, and then similar programs like that in the different geographies of the world will be incorporating EPYC as a key play there. We've also got joint planning efforts in place with our channels organization and the AMD channels organization as we look at near-term promotions and long-term selling strategies and account engagement structures. For workload matching, we talked about the points of optimization we have in the different workloads. You've got just a heritage at HPE of a legendary systems engineering capability, and so we've got a whole army of engineers that are able to work out the fine nuances of tuning systems. And what we've done is we've taken that with ProLiant and essentially bottled it into a capability that we call workload matching. So when a customer buys a second-generation, EPYC-based ProLiant, they, at configuration time, can select one of 12 different workload profiles — a single menu selection — and the system settings in the BIOS and all the system configuration points snap to the optimized settings for that particular workload. The benchmark results that we published today were all done using that workload matching capability as the setup process, and you can see the results.

What about the new EPYC processors make them a good match for HPE's workload matching feature?

It was [AMD executive] Forrest [Norrod] who was outlining in here the model that they've implemented with EPYC, where you get every feature, all the memory capability, all the I/O capability, all of the security capability and the selection up and down the stack, [which] is really [about] how many cores do you want for what level of particular performance. And so having that full envelope of possible configuration settings is super effective when you're trying to take this typically trial and error process and bottle it up into a more recipe kind of function. AMD executive Forrest Norrod made a pretty big argument for how powerful their single-socket EPYC options can be, especially compared to the competition. What should your partners and customers know about single-socket versus dual-socket for AMD systems?

I think the key there is we've positioned that with a positioning statement that that product is truly dual-socket performance at single-socket economics. That is in terms of the economics of purchasing the hardware, but probably more importantly, the software licensing implications of being able to deploy a single-socket system and get equal or better performance to what you could get on a dual-socket system at a drastically lower software licensing profile. So the [total cost of ownership] equation that you can get with building on that single-socket kind of infrastructure is a breakthrough. It was a breakthrough with Naples, and it's magnified even further now with Rome.

AMD is becoming a lot more competitive in general, especially with the new processors. How do you play the role of the neutral party between AMD and Intel?

That's our heritage, right? Pick any hardware or software part of the equation, and we are a partner-heavy model. That is core to our philosophy, core to our DNA. When you're talking about Microsoft and Linux, that's evolved over time. When you talk about the networking world, there's Intel and Mellanox and Broadcom, et cetera. So that's something we're very familiar with.

And the experience there is knowing exactly what workload the customer is wanting to run and being able to offer the right tool for the right job. I think we heard some of the presentations in here talking about the right workload for the right hardware. That's a little bit backwards, I think, because that presumes you have a hardware choice first and then you decide what workloads there are. We start with a customer and their workload and then work back to what's the best set of technologies to position for them. So Intel-based servers, AMD-based servers is just another chapter in that book for us that we’re very familiar with. And that's why when we say virtualization, HPC, big data and analytics and AI kind of environments are super well-tuned for what we're doing with Rome, that's part of that. Workloads that are memory-intensive, I/O-intensive or can benefit from high scalability and core count. How do you determine where you use AMD for future systems?

As [HPE CTO] Mark Potter alluded to, we've got right now for implementation a large number of systems based on AMD. You saw Cray was on stage today. Obviously, they're a strong partner of AMD and will eventually be part of HPE as well. So it really spans for us everything from an entry-level, single-socket lightly configured system eventually all the way up through very high-performance systems — and even today, very high-performance computing systems that we've developed on AMD EPYC, and we'll continue to evolve that as well.

I would say you could almost look at just about everything we do in the compute infrastructure space and assume that there's a point in there or a portion of that that we see as being appropriate for an EPYC-based implementation. We have already implemented AMD EPYC in ProLiant servers, in our Cloudline server line, in our Apollo server line, so it's already been fairly broadly used, and we're only going to grow that even more. Is there anything that partners or customers should know about AMD-based offerings through HPE Financial Services and HPE GreenLake ?

That creates some flexibility and financial flexibility, as well as technical flexibility. And in that domain, there really are two things that we think are important.

One is, obviously, this is a very compelling value proposition, and we recognize that there are many customers that are going to say, "wow, I want to take advantage of that, but my available budget to suddenly do something that I wasn't planning on doesn't exist." And so we offer a capability today — Accelerated Migration through HPE Financial Services — where we will work with a customer to come in and essentially purchase their assets, their IT assets and then on a use-basis rent [the assets] back to them. So that frees up capital dollars for them to be able to invest in new innovations, like deploying systems based on EPYC. At the same time, they don't have to immediately get rid of their old systems. We'll take care of migrating that for them and then retiring those assets when the time comes.

The second piece is GreenLake, which is a consumption-based, as-a-service model that gives you cloud-like experience on-prem. And so in that case, we'll understand what the customer's need profile looks like, including what peak-demand periods and low-demand periods are going to look like. We'll land that equipment for them in their environment. We run it and operate it, and it's metered, and they really are paying for what they use, just like they would a cloud service. So obviously our full portfolio of products will become part of the GreenLake offering, including these new EPYC-based systems.