Whether you’re a longtime iPhone user, or loyal to Samsung’s Android phones, you might want to stop and take note of Apple’s new iPhone 12 series. Why? Because Apple is shaking things up: The design is all new, 5G service is available for the first time, and there’s an array of other features never before seen on an iPhone. Plus, for the top-of-the-line model in the series--the iPhone 12 Pro Max--there’s another unique element: The OLED screen on the iPhone 12 Pro Max is actually the largest iPhone display ever.

It’s still not large enough to match the newest flagship phone from Apple’s top rival, Samsung, however. And that smartphone--the Samsung Galaxy Note 20 Ultra--has some other new features vs the iPhone 12 Pro Max that are worth considering, too. So if you’re searching for a new phone, and it’s coming down to an iPhone vs Samsung Galaxy decision, which of the devices here is the best choice? What follows is the CRN Test Center’s comparison of Apple’s new iPhone 12 Pro Max vs Samsung’s Galaxy Note 20 Ultra on specs, features and price. So just how big is that iPhone 12 Pro Max screen? The device features 6.7 inches of display space, a bit larger than its predecessor, the 6.5-inch iPhone 11 Pro Max. However, as noted, the Samsung’s Galaxy Note 20 Ultra still has it beat. The Note 20 Ultra offers 6.9 inches of display space—and depending on who you ask, the device also has an advantage by not having the camera notch cutout of the iPhone.

In terms of the display technologies being used, both phones offer vibrant and colorful OLED screens, along with high resolution--458 pixels per inch (ppi) for the iPhone 12 Pro Max and even sharper resolution of 496 ppi for the Galaxy Note 20 Ultra.

The redesign of the form factor for the iPhone 12 lineup also switches the iPhone 12 Pro Max to a flat-edge design. The phone is boxier than the iPhones of recent generations--which had featured a curved-edge design since the iPhone 6 in 2014. The redesign also removes the border that used to separate the display and the stainless steel body--causing the iPhone’s glass to be flush with the enclosure. At last, Apple is catching up to Samsung in the 5G department. All of the new iPhone 12 models support 5G, but they’re the first iPhones to do so—whereas Samsung has been releasing Galaxy phones with 5G support since the middle of last year. Better late than never, though. And some might argue that Apple is not even really late, and that now is actually the ideal time for a 5G iPhone. That’s because some major carriers are only now launching 5G coverage broadly in the U.S. For example, Verizon’s 5G Nationwide service is just rolling out to 1,800 U.S. cities.

So what sort of 5G service will the two devices provide? Both the iPhone 12 Pro Max and Galaxy Note 20 Ultra will support the two major types of 5G. I.e., both support sub-6GHz 5G connectivity--which is the more widely available 5G variant—as well as the higher-speed 5G service, known as mmWave (which stands for millimeter-wave).

Experts have said that users will see widely varying 5G speeds, depending on carrier and location. The CRN Test Center tried out the Galaxy Note 20 Ultra over T Mobile’s network in Portland, Ore.—and got speeds that were 33 percent higher over 5G than LTE (80 Mbps download over 5G versus 60 Mbps over LTE). Perhaps more importantly, we found that using 5G on the Note 20 Ultra just felt significantly faster, with videos and webpages loading instantaneously. One huge difference between the two phones in this face off is that the Galaxy Note 20 Ultra—like past Note devices--features the S Pen stylus. And there are some notable improvements this time around. For one thing, Samsung has really cut down on the latency with stylus on the Note 20 Ultra. It feels much more like pen on paper this time. While Note users in the past have found plenty of cases where using the S Pen was ideal, the Note 20 Ultra should really increase the usefulness of the stylus.

In the Notes App, meanwhile, the S Pen can now be used to annotate PDF files, which can be imported directly into the app. Samsung has also expanded the “air actions” that are available through gestures with the S Pen. Air actions enabled with the stylus now include move backward, home, move forward, recent app and screen capture. The iPhone 12 Pro Max is powered by the A14 Bionic chip, which includes a six-core CPU—and which Apple is calling the “fastest chip in a smartphone.” CPU performance can reach as much as 50-percent faster speeds than “the fastest competing smartphone chips,” according to Apple. Initial Geekbench 5 benchmark scores reported online do suggest a noticeable performance advantage for the A14 Bionic.

Still, the Galaxy Note 20 Ultra does compensate by including a stunning 12 GB of RAM—which is more RAM than most PCs start at. That’s compared to a reported 6 GB of RAM for the iPhone 12 Pro Max. 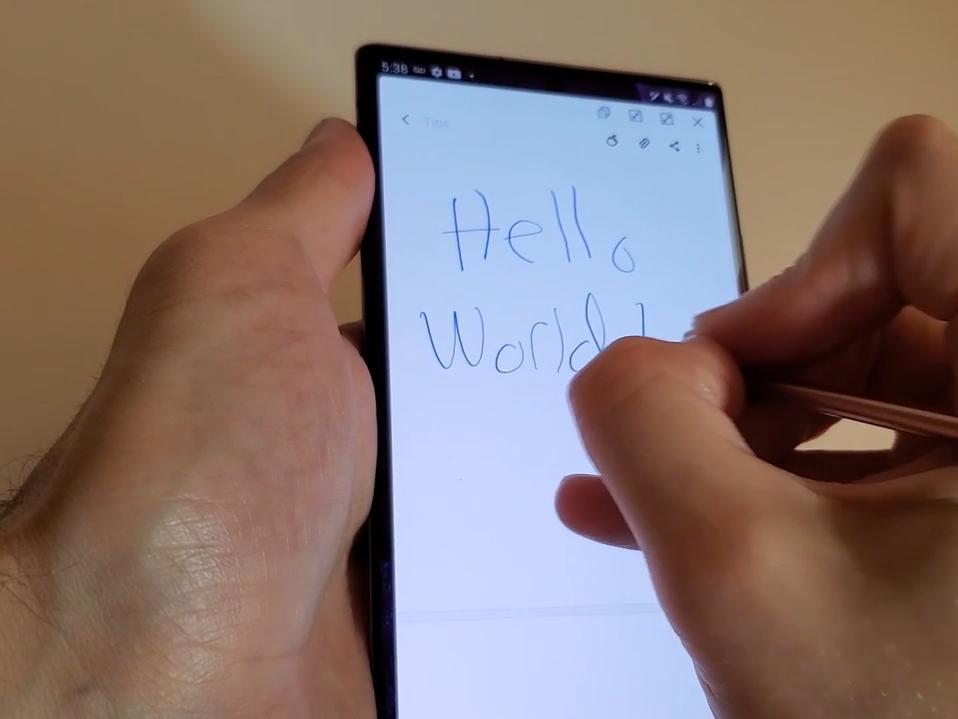 Comparing the battery life these two devices is not as straightforward as you’d hope, but we’ll do our best. Apple volunteers the detail that the iPhone 12 Pro Max provides up to 20 hours of video playback over Wi-Fi. This is, of course, based on ideal circumstances and not likely to be the norm in real-world usage.

For storage, the Note 20 Ultra offers a choice between 128 GB and 512 GB models. Buyers of the iPhone 12 Pro Max can choose between variants with 128 GB, 256 GB or 512 GB of internal storage. Notably, Apple’s predecessor device, the iPhone 11 Pro Max, had included half of the storage at the entry level—64 GB. Both smartphones in our comparison excel when it comes to their camera systems. The Galaxy Note 20 Ultra features a triple rear camera system—consisting of two 12-megapixel cameras (wide-angle and ultra-wide) and a whopping 108-megapixel telephoto camera. The camera setup also provides up to 5X optical zoom and up to 50X “super resolution” zoom; optical image stabilization; and key capabilities such as night mode, scene optimizer, shot suggestions, flaw detection and live focus. The Note 20 Ultra camera also offers the “Single Take” feature, which automatically captures photos and videos using several modes at once—and then lets users later decide which images and videos they want from a gallery of options.

The iPhone 12 Pro Max also features a triple rear camera system—12 megapixels on each camera—which introduces a new wide camera that comes with an improved ƒ/1.6 aperture. Other key features include a new image signal processor for enhancing photo quality, Dolby Vision HDR video recording and a LiDAR scanner (for enabling improved augmented reality and faster autofocus in Night Mode). The device also includes a large sensor on its wide camera--enabling better photos in low light—and up to 12X digital zoom or up to 5X optical zoom. The redesign on the iPhone 12 Pro Max has also enhanced its durability. The display features what Apple is calling “Ceramic Shield” material, which involves using high-temperature crystallization to improve toughness. The drop protection on the iPhone 12 Pro Max is now 4X better than in the past, according to Apple. Meanwhile, Apple announced that the device supports magnetically attachable MagSafe accessories. The accessories can snap onto the back of the phone, as a new option for enabling wireless charging.

Special features on the Galaxy Note 20 Ultra include connectivity to Samsung’s DeX Android desktop. And with the Note 20 Ultra, connecting to DeX is a lot easier—as you can now pull up DeX wirelessly on Smart TVs. It’s another sign that the technology is advancing toward greater usefulness—and on its way to more mainstream adoption. While Apple has long had a reputation for high-priced devices, their iPhone lineup is no longer the most expensive on the market. And Apple’s new iPhone 12 Pro Max is easily the more affordable phone in this comparison. The starting iPhone 12 Pro Max price is $1,099--vs a starting price of $1,299.99 for Samsung’s Galaxy Note 20 Ultra (in both cases with 128 GB of storage at the base level).

If you happen to want the maximum internal storage for each device, 512 GB, the Galaxy Note 20 Ultra price goes up to $1,449.99. Remember when we mentioned that the Note 20 Ultra has PC-level RAM? Well, it also has PC-level pricing.