CRN rounded up 20 of the latest products that students need, from smart backpacks and blenders, to speakers and laptops.

Back In The Saddle

Going back to school can be exciting for many college students, but it can also be a challenging experience. The right tech products can make the transition from summer to fall a little easier.

That's why CRN rounded up the latest gadgets that students need to get the most out of their 2018 learning experience – and their downtime. Here are our top 20 suggestions, from smart backpacks and blenders, to speakers and laptops. Being called one of the best Anti-Theft Smart Backpacks, the Mancro packs some great technology into a lightweight bag. This Mancro includes anti-RFID protections with a protective layer sewn into the fabric to block magnetic scanners. The backpack also features a handle reinforced with steel to prevent it from being cut away from a user's grasp, and it's made of extra-strong polyester that is tear and water resistant.

The Mancro has over 14 compartments, including a laptop compartment large enough to fit a standard-sized 17" laptop. The Mancro backpack is going for $33.99 on Amazon. Students everywhere can appreciate the convenience of wireless charging. Samsung's Fast Charge Wireless Charging Stand is specially designed for the Samsung devices -- it charges Galaxy phones up to 1.4 times faster than other wireless chargers, according to Samsung -- but it also works great for iPhones, too. That's because the device can charge any Qi-enabled smartphone, which includes the most recent iPhones (X, 8 and 8 Plus) and Galaxy phones (S9/S8, Note8). Users can lay their phones flat on the charger or prop up them up in stand mode for use while powering up.

The Samsung Fast Charge Wireless Charging Stand is priced around $32.44. Any dorm-dwelling student will love a pair of noise-canceling headphones. The Sennheiser's HD 4.50 is a top pick, and is also significantly less expensive than competing products. The Sennheiser set also can connect wirelessly over Bluetooth. If noise-cancelling headphones are too bulky for a backpack, the Bose SoundSport In-Ear Headphones are a good option. The earbuds boast Bose's much-respected audio quality and can conform to a user's ear shape to stay in place. These headphones are made from weather- and sweat-resistant materials, making them perfect for after-class or early morning workouts.

The Bose SoundSport In-Ear Headphones are priced at $99 on Amazon. 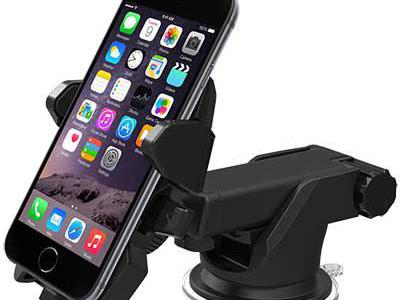 With law enforcement cracking down on distracted driving, it's important for students of any age to keep both hands on the wheel. This mount from iOttie attaches to the dashboard or windshield using a suction cup and offers easier locking and releasing of a smartphone. The mount's telescopic arm lets users move their device for optimal viewing angles – especially useful for navigation.

The iOttie Easy One Touch 4 Car Mount is priced at $24.65 on Amazon, and it's also available at Target and Walmart for the same price. Anyone who has ever spent time wandering through a giant commuter parking lot will appreciate the FordPass SmartLink, a subscription-based dongle that plugs into a vehicle's on-board diagnostics port and enables a number of smart vehicle features. This includes the ability to track a car, add an LTE hotspot, lock and unlock a car using a smartphone app, and receive diagnostic information about the car's health.

The SmartLink is a bonus for older cars that lack the newest smart features that many new vehicles have today, but that might be out of reach for students on a budget.

The SmartLink is available at Ford dealerships for $17 per month, plus an installation fee. Similar products are available from Verizon, Samsung and other companies. Apple's latest tablet, the iPad Pro 10.5-inch, is a great first tablet or upgrade for a student looking for an alternative to laptops. The new iPad Pro includes features to boost productivity, including Apple Pencil and Smart Keyboard compatibilities. The tablet includes a 12-megapixel camera, runs iOS 11, and weighs in at a little over one pound. Decorating dorm rooms or apartments just got easier with HP's tiny Sprocket printer. The printer, which can fit in the palm of your hand, lets users wirelessly connect from their mobile devices and immediately print 2x3-inch photos from the device's camera roll or from a user's social media profile. The printed photos also double as stickers using HP's Sprocket paper. For the active student that enjoys starting the day with a run – or maybe those running late to class – this shoe offers advanced cushioning for reducing impact and "maintaining energy return to runners," according to Under Armour. This "connected" running shoe also includes sensors that track and analyze a variety of running metrics with the help of the MapMyRun app.

The Under Armour HOVR Sonic is available in both men's and women's versions and is priced at $110. For the student opting to bike to and from campus, the Lumos Smart Bike Helmet can help keep users safe with built-in LED lights on both the front and back, which can be set to flashing. Using a wireless handlebar remote, users can turn on a signal on the helmet indicating when they are making a turn. Additionally, motion sensors detect when the wearer is slowing down and indicate that motion to others on the road via a red light. Self-proclaimed techies – or those that just like staying connected – will love the third generation of the Apple Watch. Series 3 goes beyond its predecessors with the addition of cellular connectivity. This iteration can make phone calls and use Siri without proximity to an iPhone. The watch is "swim-proof" like the previous generation and is the same size as the second-generation model. Speaking of smartwatches, the Fitbit Ionic is the first true smartwatch from Fitbit. The Fitbit Ionic runs Fitbit OS, an operating system based in part on Fitbit's Pebble acquisition. This product is great for the health and fitness-minded student, with capabilities such as GPS, heart-rate tracking, guided workouts and sleep tracking. The Ionic also offers smartwatch features including apps, music, notifications and payments, and can live up to five days on one full battery charge. Late-night cram sessions require lots of coffee. The OXO Good Grips Cold Brew Coffee Maker lets users easily brew their own cold brew coffee by the pot, since cold brew by the cup can get pricey at coffee shops. The coffee maker has capacity for four cups, or 32 ounces, per brew.

The OXO Good Grips Cold Brew Coffee Maker is priced at $49.95 on Amazon. The NutriBullet Pro is priced starting at $93 on Amazon. Studying doesn't have to mean falling behind on leisure reading. For students looking for a break from the textbooks, Amazon's Kindle Paperwhite is an e-reader that offers a paper-like reading experience. The 6-inch Kindle includes a glare-free display with double the resolution of the previous model. The e-reader also features strong battery life. Lightweight laptops are ideal for students that have enough textbooks to lug around. The Dell Latitude 7390 is a great option that weighs in at just 2.59 pounds and is 0.66 of an inch thick -- one of the lightest laptops on the market today. The Latitude 7390 boasts strong performance and battery life as well as a bright 13.3-inch display and optional touch screen. Starting off a new school year might require a new phone. The latest Samsung Galaxy S9, a smaller companion to the S9 Plus, shares many of the key features of the larger model, including strong stereo speakers and Intelligent Scan authentication. The S9 has a single rear-facing 12-megapixel camera and can expand storage up to 464 GB.

The Samsung Galaxy S9 starts at $720 through all the major U.S.-based wireless carriers. For inquiring about the weather, or maybe for the phone number of the nearest late-night pizza restaurant, a smart speaker is a good call for students. The Google Home Mini is an inexpensive option for users looking for hands-free help with questions or requests. Using the speaker, Google Assistant can help users get personalized help with schedules, reminders, calls, news and more.

The Google Home mini, which comes in two colors, is priced at $39. For downtime, or even as a study assistant, music is important for any student. The UE Wonderboom is a small Bluetooth speaker, which is waterproof, can travel from room to room, and features impressive sound for its size, according to user reviews.

Tnderboom, in a variety of colors, is available on Amazon for $67.99.