Pure Storage CEO: ‘We Outdistanced, We Believe, All The Competitors’

Giancarlo told CRN that his company's Pure Accelerate conference, coming up in mid-September in Austin, Texas, will see Amazon on-stage to talk about the Pure Storage Cloud Block Store for AWS offering.

Pure Storage last week unveiled its second fiscal quarter 2020 financials: the firm reported 28-percent year-over-year revenue for the quarter of $396.3 million, placing it in the lead by a wide margin over all its publicly-listed storage competitors. Contrast that with Pure Storage's top rival, NetApp, which a week earlier reported an 18-percent drop in year-over-year revenue for its first fiscal quarter 2020 and blamed the shortfall in large part on the macroeconomic environment.

Pure Storage CEO Charles Giancarlo told CRN that macroeconomic conditions did not impact his company. Instead, he said the company depended on a combination of product differentiation and the fact that it has no large legacy customer base to protect.

Giancarlo also opened up about what to expect from next month's Pure Accelerate conference, to be held Sept. 15-19 in Austin, Texas. In particular, he said to watch the stage for an appearance by Amazon and some Amazon customers to talk about the new Pure Storage Cloud Block Store for AWS, a technology that allows his company's storage software to run natively on AWS for managing block data across on-premises and Amazon Web Services cloud environments.

For details about these and other happenings at Pure Storage, click through the slideshow. During the financial conference call, you said Pure Storage didn't see the macroeconomic situation that its competitors saw. You didn't mention a competitor by name. Should we assume it's NetApp?

Really, all our competitors. We outdistanced, we believe, all the competitors by a tremendous amount. We put 28 points on the board in terms of growth. For some competitors, we have this quarter's numbers, for some we have last quarter's numbers. But the fastest other grower was HPE at 3 percent [in second fiscal quarter 2019]. Everyone else was flat or negative. If you take the difference between our growth rate and theirs', you can really see that we're really outdistancing them by quite a bit.

But why is that? Yes, based on publicly released numbers, Pure Storage growth is impressive compared to your publicly-listed competitors. What do you attribute that mainly to?

I think we're highly differentiated in the market. First of all, the performance, the ease of use of the product, the fact that we promised the customers that the array they buy today, 10 years from now will be a brand-new array because we're able to do continuous upgrades of both hardware and software without them ever having to replace the product itself. And that's a very different value proposition to the data customers. And it's the reason for our net promoter score being so high.

I think [it's] for another reason as well. All the sales we get are basically to new customers. We only grow by getting new customers. I think our competitors have been selling to the same set of customers for a long time. And so they replace what they have. But every time we get a new customer, it's brand-new. We have that motion. Our sales team is aggressive and hungry and able to make those new sales. I think our competitors made their change from disk to flash, but now they're not able to continue to grow.

When you say continuous upgrades, people have been talking about easy upgrades for years. How often do customers actually upgrade? They'll eventually want new, won't they?

No, because it doesn't get old. We've had customers that have gone through seven generations of product and they've never had to do a data migration. For the seven generations, sometimes it's hardware, sometimes it's software. But literally, we can replace every component of the system to upgrade it without ever taking the system down. Our competitors say they create simple upgrades, but you have to replace the entire system. There's a complex data migration. And when they say it, it's always about a financial concession. In our case, its about technology just never having to bring the system down, and being able to upgrade...

It's like you [bought] a car 10 years ago. As you're driving the car down the road, you're not only replacing the motor and the wheels and the interior, but even the tires, while the car keeps going. Nobody else does that.

Oh, that's years away. We probably sell into about 40 percent of the Fortune-500. We still sell into a relative minority of the midmarket. That's one of our biggest barriers to growth, the number of at-bats and the number of times we can show up at an account that needs products. We don't release the exact numbers, but our sales teams are still quite a bit smaller than [those of] the big guys. And as we continue to grow, we can put more sales teams to work, and that allows us to grow even more. As you put those new sales teams to work, will that change how Pure Storage works with the channel?

Both. Certainly both. With our best partners, we work with them very closely to extend their abilities. But of course, in areas where we're underserved, we're opening up new channels. Next month, Pure Storage is holding its Pure Accelerate conference. Can you give us some teasers about what we might see there?

You bet. We're going to have Amazon on-stage to talk about Cloud Block Store, as well as beta customers that are using Cloud Block Store. They'll talk about what their plans are for it. We are announcing a boatload of new products, some of which will be available for sale at the show, as well as others that will be newly-announced betas.

Are those new products mainly in the hardware or software area?

How about some other hints about the new products?

When you say new segments, are you talking about new data center segments? New customer segments? Other?

New segments of use within customers, whether it's new customers or existing customers. You mentioned partnering with Amazon. How does that work when it comes to Pure Storage's channel partners?

In the case of Cloud Block Store, even though that product will be available for and will operate on Amazon, the partners will still be selling it and they'll be getting commission for it. We'll be selling it as software initially, not as a service. It will be software that will operate on Amazon Web Services, and partners, assuming that they are authorized, [they] will be able to sell it. Authorization is just about training.

Do partners need Amazon authorization or not?

It's easier if they have both, certainly. 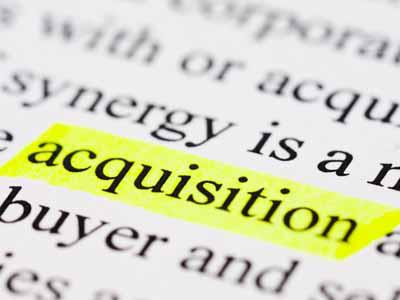 M&A plans. I believe an analyst asked about your plans with all that cash you have in-hand.

As you had heard, we had authorized about $150 million to be used for stock buybacks, and they were worried that might put a crimp in our M&A process. It really doesn't. We have plenty of capital, and it makes no change whatever to our M&A point of view which is build, partner, and buy. If we find good technology out there that we think will make a difference to our customer base and to our opportunities as a company, then we'll certainly go out and acquire it.

Are you currently talking to anybody?

You know, that's an easy question, because we're always talking to people. We have a dedicated individual on corp. development, and there probably isn't a week that doesn't go by when were not talking to somebody out there.

And, just to be clear, by "talking to somebody" we're talking possible M&A activity, right?